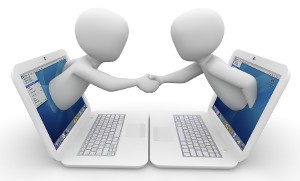 The ownership rules for copyrights, patents, and other IP vary depending on if the IP creator is an employee or an independent contractor.

These laws can vary from state to state.  Consider California. Generally, work done by an employee for an employer, at the employer’ request, does belong to the employer. However the IP assignment process is not always automatic (patents, for example, generally need to be assigned to the employer in writing).

One of the reasons why California has a booming high-tech economy is that California labor code sections 2870-2872 mandate (with certain exceptions) that work that does not relate to an employer’s business (and is done with the California employee’s own time and materials) generally belongs to the employee. However, this section of California law may not protect independent contractors.  So if you are an independent contractor, you may want to negotiate this.

Regardless of work arrangement, it is always a good idea to work out the issues of who is going to own what in writing and in advance.  For employees, spell this out with a proprietary information and inventions agreement. For independent contractors, negotiate and sign an agreement on these issues before starting work. This topic often comes up in due diligence.