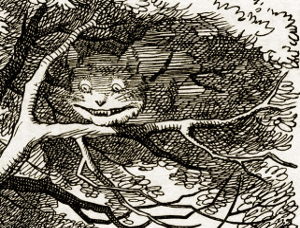 For stronger design patents – less detail can give you broader coverage, so consider turning some solid lines into broken lines.

On the surface, design patents – a patent that covers an article of manufacture’s ornamental appearance, seem simple. File multiple drawings showing your design from various angles. Think about putting your design in an imaginary cube. You can then show all six sides of this imaginary cube and a perspective overview. If (under a famous court case called the Egyptian Goddess test) an ordinary observer (familiar with the prior art designs of similar products) will confuse someone else’s product with the patented design, then there is infringement.

Design patent law raises tough questions about pattern recognition. The problem is often explained by analogy to the Cheshire Cat from Alice in Wonderland.  How much of the cat do you need to see to identify it as a Cheshire Cat?

In a design patent, you show the required parts as solid lines. You show the optional elements as broken lines.  As you turn more and more solid lines into broken lines, the design becomes more general. Of course, the application then becomes too vague to be unique or even recognizable at some point. The examiner will then likely reject your drawings. See “A Guide to Filing A Design Patent Application“ for more information.

If you want a broad coverage of your design, consider filing multiple versions.  Narrower but safer versions can have more solid lines. In riskier but more comprehensive versions, replace the less essential solid lines with broken (dashed) lines.  Perhaps a subset or outline of your product is distinct enough to warrant patent protection?  If you think that your design may have multiple levels of detail, consider putting in broken lines to show the different levels of detail in the initial filing, since the USPTO won’t let you do it later.

Another advantage of using broken (dashed) lines is that they can function like dependent claims. A design initially deemed obvious under prior art can sometimes be saved by converting one or more broken lines into solid lines.

Pros and cons of this type of patent

Compared to utility patents, design patents are relatively inexpensive to file and relatively easy to get.  However, again, the design patent is only for the artistic and non-functional aspects of the design. These patents now have a 15 year lifetime, and no maintenance fees are required.

Many countries also accept international design patents as well, but you usually only have six months to file.

A few more tips — the examiners have a well-developed ability to detect any inconsistencies between drawings. If the examiners identify this, they will reject the application as being ambiguous. You can avoid these problems by providing accurate 3D CAD files to the patent attorney and artist.