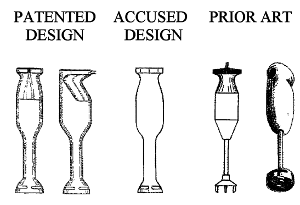 Design patent infringement isn’t just exact copying. Instead, the test is if an “ordinary observer” will see “substantial similarity.”

Determining if a particular design of interest does or does not infringe upon another design patent is a tricky area of intellectual property law.

What is design patent infringement?

According to the 2008 Federal Circuit ruling in “Egyptian Goddess, Inc. v. Swisa, Inc.” 543 F.3d 665: to infringe, a given design does not have to be an exact copy of another design patent. Instead, the question is one of “substantial similarity” under the “ordinary observer” test.

Great — what the heck is this, and how does this test determine design patent infringement?

The underlying idea is that customers looking to purchase a design patented product “Y” should not be confused by a similar-looking product “X.”

So as a practical matter, you should run this test using ordinary observers. Realize that if you are involved, it may be difficult for you to be entirely objective.  In this case, you are probably not a suitable “ordinary observer.”  Instead, determine if disinterested outsiders see “substantial similarity.”

Sometimes the differences between a given design and a particular design patent may be so high that no further comparisons are necessary. But sometimes the two devices are close.

When two designs are close, a “three-way visual comparison test” can be useful. You can do this test by making a composite illustration showing the patented design on one side. Place the “accused design” (i.e., the device you are investigating) in the middle. Put the other devices representing the closest prior art on the other side.

Essentially it is a pattern recognition problem.  The idea is to use the prior art examples to instruct the ordinary observers as to how much variation is typical in this field.  Then the average observer can determine if the design of interest is overly close to the design patent of interest or not.

The best times to consider these design patent infringement issues are before you start producing and selling a new design. So if you have a new device that you are worried about, get the opinion of some neutral outsiders ASAP.  Indeed, consider running some focus groups as appropriate. If things look too close, consider making some further design changes, and trying again.

Also, consider filing your own set of design patent applications. To speed this up and make sure that the examiner looks at your competition, use the rocket docket. The rocket docket lets you directly cite the design(s) that most concern you. This way, you can generate proof that USPTO examiners have considered your competition, and still think your device is different. Your patents can reduce the chance of litigation because you will own IP in this area.