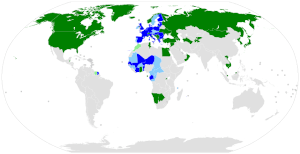 The Hague system allows you to use one application to file design patents in many countries simultaneously, but it is quirky and doesn’t work everywhere.

Are you thinking of filing your US design patent application outside the US?  For some countries like China and India, you will have to register locally. For other countries, such as Canada, Europe (EU), Japan, and Korea, consider using the Hague system.  In either case, think fast, because the deadline is often just six months after your initial filing.

The US finally signed up in 2015.  Other countries are also in the process of joining but are not in yet. There are presently 66 countries participating.  So as the map shows, coverage is still somewhat uneven.

The rules are not uniform.

The drawing requirements and extent of post-filing examination can vary between countries.  The EU, for example, limits design drawings to a maximum of seven views, but otherwise, acts as a registration system that doesn’t require much subsequent effort.  By contrast, like the US, Japan also requires examination as well. So in Japan, as well as the US, the applicant must thus do additional activities and pay additional fees.

Unlike US design patents, the Hague system allows you to register multiple related designs in one application.  However, for those thinking of gaming the system for US design patents, realize that the USPTO will require you to select just one design. The US will require you to pay extra to examine any other versions.  Still, if you have a large number of variations, this is an option to consider.  However, note that the Hague system also publishes all design applications within six months of filing, while the US does not. So the Hague system offers less confidentiality.

You must pay maintenance fees on your Hague system registrations every five years. These last for up to a total of 15 years of total coverage. By contrast, after a US design patent has issued, the USPTO will give you 15 years of coverage with no maintenance fees.

Like other patents, the USPTO will accept Hague system patent applications and forward them on to the international office in Switzerland.  If your design patent has not yet previously passed a security review and obtained clearance, then you should (must) file via the USPTO first.  However, if you have clearance (e.g., you have previously filed in the US and received international filing approval), then use the Hague’s E-filing system. It is both quicker and easier.